THE TOPSY-TURVY WORLD OF AIR QUALITY

THE TOPSY-TURVY WORLD OF AIR QUALITY

Amid a furious debate about air quality, Nick Molden has buckled up his belt of truth

At the inaugural National Air Quality conference held in London in December, 2017, Nick Molden (Christ Church, 1992) was stirringly thanked in a packed auditorium by the UK’s Environment Agency Senior Air Quality Advisor, Jim Storey. He was thanked for bringing clarity to the seemingly endless issue of car emissions and the pollution they cause.

Molden is also thanked on his company website by an unnamed spokesperson for giant German carmaker Volkswagen, for showing that VW cars are not as dirty as everyone thought. 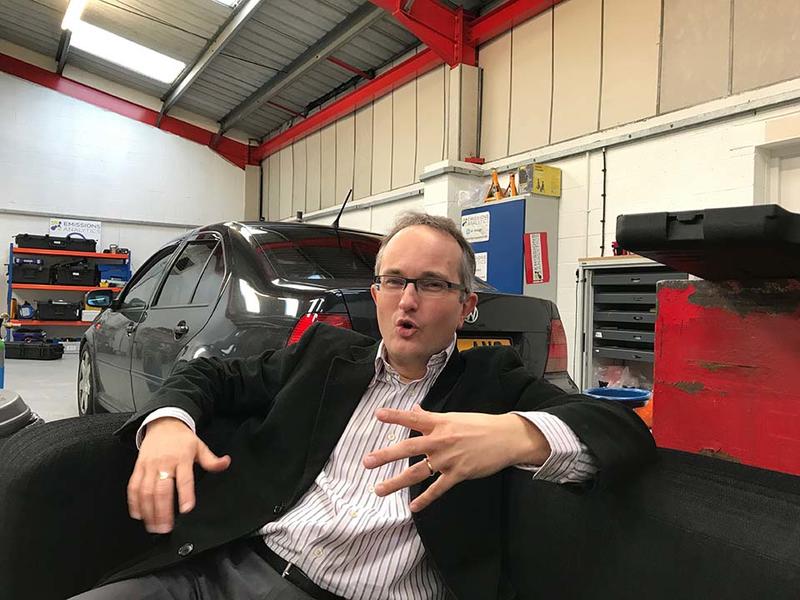 Elsewhere on the same website, Molden notes that his company’s vast and ever-growing database on ‘real’ car emissions has been used by US-based International Council for Clean Transportation (ICCT).

Wait a minute, I exclaim – isn’t that the tiny non-profit group in America that brought Volkswagen to book and blew the lid on dieselgate, in September 2015, having demonstrated that VW cars were much dirtier than everyone thought?

Welcome to the topsy-turvy world of air quality, where, it seems, almost nothing is what it seems.

When I meet Molden at a big industrial shed in Stokenchurch, not far from Oxford (a coincidence – his business Emissions Analytics also has offices in the US, Germany and Korea), he merely gestures towards all the serious-looking kit that festoons workbenches and walls.

‘We’re a ‘publish and be damned’ model, because we test thousands of cars on real roads, collect emissions data in a rigorously scientific and repeatable way, and then publish it.’

He adds that he can do that because he is ‘in the pocket of no one.’ ‘No government agency; no carmaker; no lobbying group; no charity and no environmental pressure group.’ The company makes money from selling data and custom testing services to everyone who wants it.

I suggest that it’s a brave model. Either everyone will trust him or no one will understand him, particularly in the endlessly ‘influenced’ world we seem to inhabit these days.

It’s at this juncture that Molden cites the clarity of mind that he acquired from a Oxford PPE degree, adding however that he abandoned the Politics component and focused on Philosophy and Economics. An irony, I suggest, given that he has recently been in Brussels to help the European Union clear its head on how to replace its discredited car emissions test with a new, more accurate one.

So how does he explain the paradox of being the only man in the world to have received accolades from both Volkswagen and the very people who busted them at a cost of billions of dollars in lawsuits and fines? 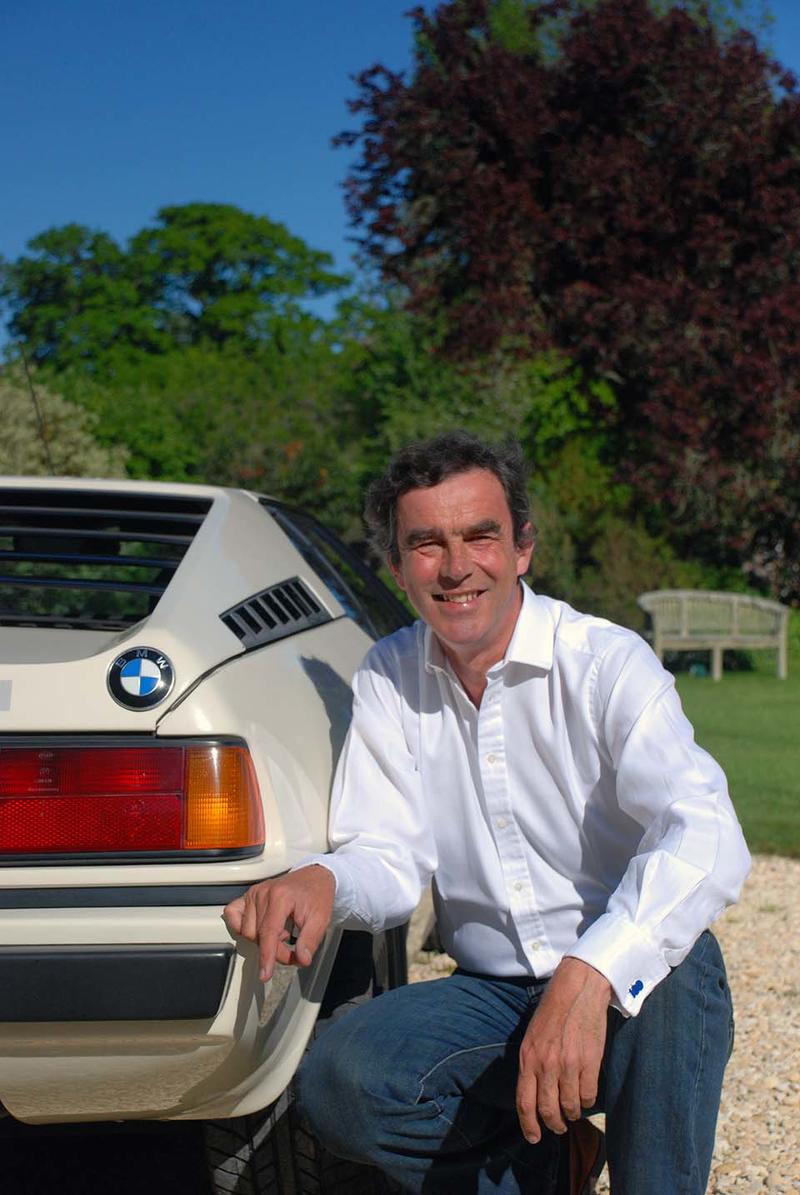 ‘Well, when we started testing cars back in 2011, we did so primarily to establish their true fuel economy,’ he says. Molden and his chairman Eric Verdon Roe (Exeter, 1972) had built previous careers and close links to the world’s automotive media, and what the car journalists and the car-buying public had all begun to note was the increasing discrepancy between quoted fuel economy and experienced fuel economy.

Molden saw himself as a consumer champion. ‘There was a bit of rip-off Britain about it,’ he says. ‘It seemed fraudulent to tell a car buyer that the car would achieve 40 MPG when in practice it achieved 25 MPG.’

He says that the discrepancy between official fuel economy and real fuel economy stands today at about 30%, and only now is a new test regime tentatively beginning to replace the discredited one in Europe.

The much larger air quality scandal that erupted in 2015 as ‘dieselgate’ was, says Molden, a surprise to him as it was to many car industry insiders. Yet the broader issue of emissions and air quality is not unrelated to inaccurate fuel economy claims. If a car is burning more fuel than claimed, it is likely to emit more pollution, and certainly more CO2.

And yet, dieselgate was, in important ways, a watershed moment. It swung the spotlight of public health onto an issue than until 2015 had mostly been a matter of transport policy and consumer justice, and thus a low priority in the everyday dramas of most governments.

With pressure groups springing up with names such as ‘Doctors against Diesel’, the newspaper headlines suddenly started to scream a crisis defined by clouds of poisonous nitrogen dioxide and invisible but carcinogenic particles. Far from being a marginal political issue, cars were suddenly shown to be poisoning children at the school gate and in the playground.

At the very point in history where cigarettes had been banned from public spaces, it was as if suddenly everyone was being forced to inhale whenever they walked outside.

The role of diesel in all this is, says Molden, more complex than it may seem. As anyone knows who’s owned one, a diesel car is typically quite frugal compared to its petrol counterpart and typically emits less carbon dioxide. This is why they were championed in some markets by governments – particularly in the European Union from about the turn of the new millennium.

But diesel cars also emit more nitrogen dioxide and particulates than their petrol cousins, so that as time wore on more and more cities began to register illegal levels of pollution.

But what Molden discovered was that no two cars were quite alike. Some larger diesel cars have been shown to be very clean, while others have been proven to be spectacularly dirty –in breach of the official limit on NOx by more than twelve times.

Molden concedes that he was in the right place at the right time, having invested heavily in state-of-the-art emissions-measuring equipment, known as PEMS (for Portable Emissions Measuring Systems). In fact it was using similar equipment in conjunction with the University of West Virginia that the ICCT gathered the data that busted Volkswagen.

Molden finds himself today with the world’s leading database for ‘real’ emissions covering most models of car and van sold in Europe and America since 2009, much of it published publicly as the EQUA Index, to help ordinary car buyers make informed decisions.

Recently a guest on Jeremy Vine’s BBC Radio Two show, Molden was asked point blank whether he would rather live on a street populated entirely by diesel cars or by petrol ones. His answer was petrol – but with the caveat that not all petrols are clean, and not all diesels are dirty. You have to discriminate.

Tellingly, there is a third choice that apparently gets you off the hook of a bad air conscience while increasingly matching or beating diesels for fuel economy and CO2. It's the petrol hybrid. Molden notes in a recent EQUA Index press release, ‘To date, all Euro 6 hybrid vehicles accessed [by the EQUA Index] have produced real-world results in line with official targets [for NOx].’ Some hybrids, he adds, still lag the best diesels for CO2 and fuel economy.

As for VW, Molden clears up my confusion. ‘The point about VW is that they appear not to have used the same ‘defeat device’ in the same way in Europe as in the US, because they didn’t need to. Air quality rules are less stringent in Europe.’ As for how dirty they are, he notes that VWs were bang on average overall for the EURO 5 cars, of the 'dieselgate' generation, neither better nor worse than other car makers when viewed together across many models of car. For the successor EURO 6 cars, he adds, VWs 'are the cleanest on average.' Evidently VW have cleaned up their act while other manufacturers have carried on much as normal, some of them -one might say- disgracefully.