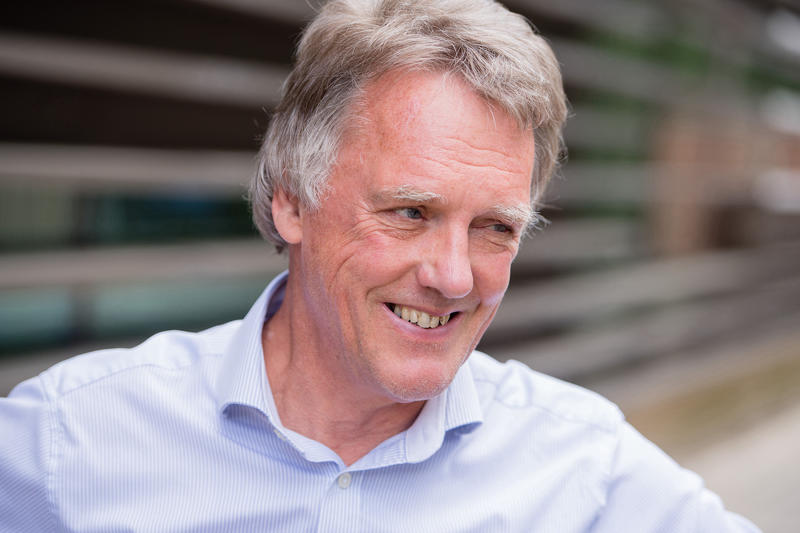 Professor Sir Peter J Ratcliffe, Director for the Target Discovery Institute within the Nuffield Department of Medicine at Oxford University and Director of Clinical Research at Francis Crick Institute, London, has today been announced as a winner of the Nobel Prize in Physiology or Medicine

Sir Peter was announced as a winner of the Prize alongside William G Kaelin, Jr of Harvard University and Gregg L Semenza of Johns Hopkins University. Together they discovered the key mechanisms that our cells use to detect and respond to low oxygen levels, known as 'hypoxia'.

Every cell in the body needs the right amount of oxygen to function and survive. When our blood has too little oxygen, our kidneys send signals to boost red blood cell production to carry more oxygen. At his Oxford laboratory, Sir Peter discovered a universal mechanism for detecting and responding to hypoxia that has since been found in all our cells.

Sir Peter said: ‘I’m honoured and delighted at the news. I’ve had great support from so many people over the years. It’s a tribute to the lab, to those who helped me set it up and worked with me on the project over the years, to many others in the field, and not least to my family for their forbearance of all the up and downs.’

Professor Louise Richardson, the Vice-Chancellor of the University of Oxford, said: 'Oxford University is extremely proud of Professor Sir Peter Ratcliffe, and we are delighted that he has been honoured by the Nobel Assembly today.

'Sir Peter has made an outstanding contribution to understanding our fundamental physiology. For 30 years, his Oxford laboratory has been an international leader in the discovery of how cells sense and respond to oxygen depletion. His work has opened up promising new ways to tackle cancer, anaemia and many other diseases.

'While making an immense contribution at the forefront of medical research, Sir Peter has also provided inspirational teaching for our medical students and supported countless patients. Today’s honour is enormously well deserved.'

Paul Nurse, Director of the Francis Crick Institute, said: ‘Many congratulations to Peter on this well-deserved recognition of his ground-breaking research. His work has led to unexpected discoveries, revealing a universal mechanism for detecting and responding to oxygen levels in all our cells. These discoveries are based on innovative experiments, highly imaginative mechanisms, and a total dedication to absolute rigour. Peter is an exemplary clinician scientist. We are proud to have him at the Crick as our Director of Clinical Research.’

Sir John Bell, Regius Professor of Medicine, University of Oxford, said: ‘Sir Peter Ratcliffe has made a major contribution to our understanding of how cells respond to low levels of oxygen. He identified the problem 30 years ago here in Oxford and has tenaciously worked through the fine detail of how this system works. It is likely to have profound implications ultimately for the treatment of cardiac diseases and cancer. It is an impressive story of how a clinician scientist can combine ground-breaking basic science with caring for patients within the NHS.’

The seminal discoveries by this year’s Nobel Laureates revealed the mechanism for one of life’s most essential adaptive processes. They established the basis for our understanding of how oxygen levels affect cellular metabolism and physiological function. Their discoveries have also paved the way for promising new strategies to fight anaemia, cancer and many other diseases.

This year’s laureates discovered that when oxygen levels drop, levels of a protein complex (dubbed HIF-1α) increase. Under normal oxygen conditions, HIF-1α is rapidly broken down – but under low oxygen conditions it builds up. Crucially, this complex binds to segments of DNA near the gene for erythropoietin (EPO) - a hormone produced by the kidney.

Sir Peter's current research is investigating hypoxia and the role it plays in a variety of health conditions, including heart disease, metabolic diseases and cancer, particularly in kidney cancer which could lead to potential new cancer treatments.

Following this comes the news that Professor John B Goodenough from the Cockrell School of Engineering at The University of Texas at Austin has been awarded the Nobel Prize in Chemistry for his work at Oxford University that made possible the development of lithium-ion batteries.

Professor Sir Peter John Ratcliffe FRS (born 14 May 1954) is Director for the Target Discovery Institute within the Nuffield Department of Medicine, University of Oxford and is a practicing clinician at the John Radcliffe Hospital, Oxford.

He is Nuffield Professor of Clinical Medicine and is a member of the Ludwig Institute for Cancer Research.

In 1978, Ratcliffe moved to Oxford where he trained in renal medicine at Oxford University, with a particular focus on renal oxygenation.

In 1989 he founded a new laboratory in Oxford, obtaining a Senior Fellowship from the Wellcome Trust to work on cellular oxygen sensing pathways. The lab explored the regulation of erythropoietin – a hormone responsible for stimulating the production of red blood cells, known to be turned on in kidney cells following oxygen deprivation.

The Ratcliffe group helped to uncover a detailed molecular chain of events that cells use to sense oxygen. This same pathway is also disrupted in many tumours, allowing them to create new blood vessels to sustain their growth. Much of our current understanding of hypoxia has emerged from the laboratory of Ratcliffe.

Sir Peter was the Head of the Nuffield Department of Medicine at the University of Oxford 2004-2016.

Since 2016 he has been the director of the Target Discovery Institute, University of Oxford, and Clinical Research Director at the Francis Crick Institute.

He is a Fellow at Magdalen College, Oxford.