IN SEARCH OF THE CLOUDED LEOPARD 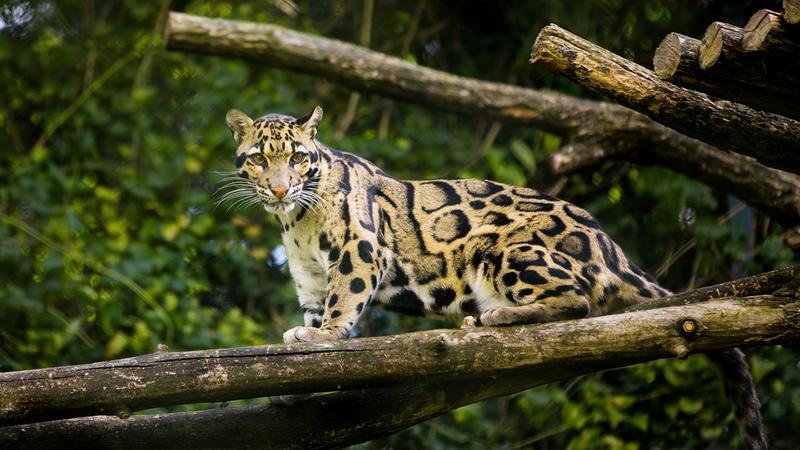 IN SEARCH OF THE CLOUDED LEOPARD

Laos has a brilliant DPhil student in Oxford

It’s still common to read that Laos, the country sandwiched between Vietnam and Cambodia, has tigers and leopards, particularly in huge, government-protected areas such as Nam Et-Phou Louey in the north. But the shocking truth is that they have already been poached to local extinction to please wealthy Chinese consumers just over the border to the north.

This is one side of the knife’s edge trodden by conservationists trying on the one hand to be realistic and honest about what they find, and encouraging and optimistic on the other.

One of a tiny number of students from Laos at Oxford (also referred to as Lao PDR since becoming a one-party Communist state in 1975), Akchousanh Rasphone is just completing her Oxford DPhil, a student of WildCRU at Lady Margaret Hall since 2014. 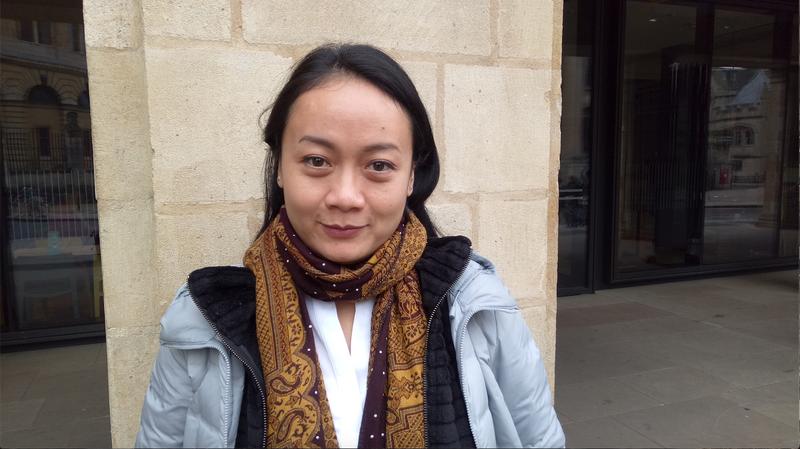 Her thesis title is “The intraguild interactions of large carnivores and their impacts on their prey and other smaller carnivores in the Nam Et-Phou Louey National Protected Area, Lao PDR.”

Put baldly, she has surveyed four enormous quadrants of the Nam Et–Phou Louey (pronounced “naam et poo loo-ee”) National Protected Area (NPA), to measure animal populations and to attain knowledge about how second tier carnivores behave in the face of human encroachment and reduced prey. Located to the far north-east of Lao PDR, near the border with China, Nam Et–Phou Louey boasts an area of 410,720 ha and is the largest of Laos’ NPAs. Rasphone established four teams who each walked for ten days to set up 160 camera traps to record wildlife movements on observed routes, over many weeks.

The good news is that four of the six cat species known to exist in Laos were observed by Akchousanh’s silent army of cameras. The beautiful clouded leopard Neofelis nebulosa, the Asian golden cat Catopuma temminckii, the marbled cat Pardofelis marmorata and the leopard cat Prionailurus bengalensis.

To the western eye, these are exotic, fabled creatures. Akchousanh says that the sightings were a jolt of energy and encouragement. ‘You have to retrieve your cameras, and on occasion there will have been a problem – say for instance that one of them has been knocked over. But we got them home and then spent hundreds of hours reviewing pictures caught either by infra-red or by movement triggers tiger. There were many wonderful moments.’ 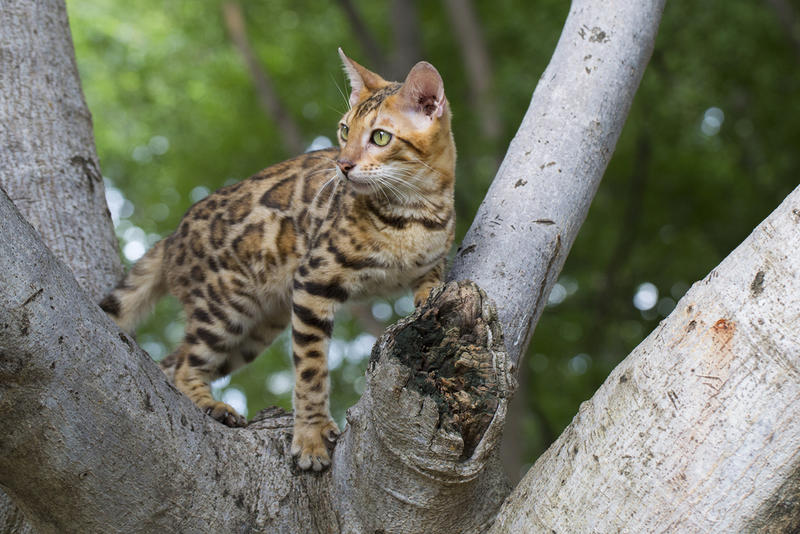 However, of the two largest carnivores, the tiger and the Indo-Chinese leopard, Panther tigris, and Panthera pardus respectively, there was not a single sighting.

Akchousanh says, ‘We have to be very careful. We can’t prove beyond doubt that there are no tigers and leopards left. But in 2013 I captured photos of just one male and one female tiger, far fewer than expected, and none since then. It would be unusual for them to have completely relocated. Meanwhile poaching is rife and government enforcement low. Some villagers are paid hundreds of dollars to snare these creatures for the Chinese market. The reality is that I would say that these two species are locally extinct.’

She adds later that wild tigers can still be found in Thailand, where the government has become very focussed on conservation and law enforcement. But this is not the case in Laos, where and conservation remains ‘a very challenging field.’ 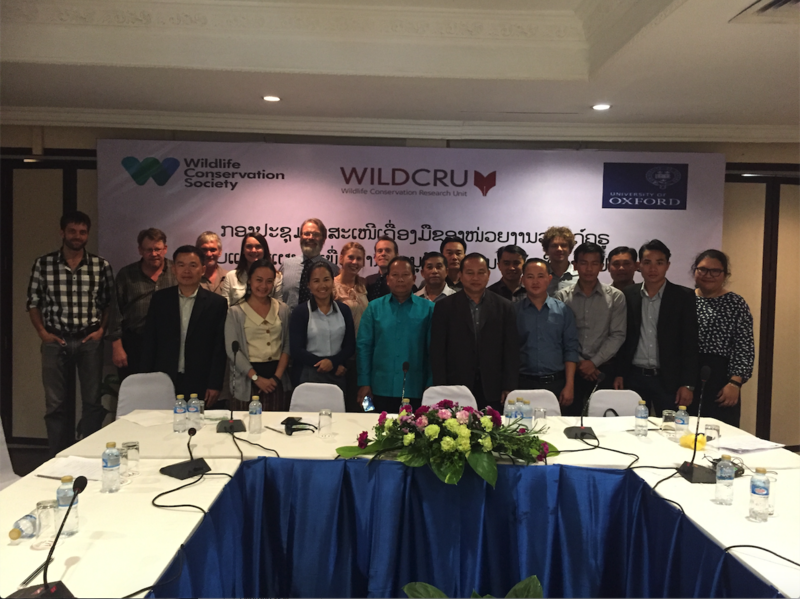 WildCRU workshop held in late 2018. Akchousanh is in the front row, yellow shirt.

In fact the main conservationist effort in Laos has traditionally been from the US NGO Wildlife Conservation Society, and now Oxford’s WildCRU unit, the part of the Zoology Department that became world famous over the illegal killing of Cecil the lion in 2015.

While Laos has a comparatively small human population of 7 million, it is growing rapidly. ‘Gold and copper mining and hydro-power are also sources of threat to the forest, alongside logging, farming and roads.'

‘The problem is partly also one of perception,’ she says. ‘To see pictures of Nam Et–Phou Louey, you’d think that it was pristine. But in fact only 0.1% of it is primary forest, and two-thirds is scrub forest, not proper forest, owing to previous shifting cultivation.’ It is almost impossible to return this to forest, she adds. ‘But the other issue is that the population of animals has fallen hugely, because of snaring and poaching. You’d expect a high population of predators and prey, but their numbers are hugely reduced.’

Not daunted by this, WildCRU head David Macdonald travelled to Laos with Akchousanh as part of a team to workshop conservation themes and report their findings to a large group of government officials and other, protected-area park mangers. This is part of a larger WildCRU project to deliver conservation planning toolkits to six countries in S.E. Asia, and the meeting in Laos was a great success with government and NGO delegates keen to collaborate with the WildCRU team.

Akchousanh says that while Laos remains tied up in its imaginary tigers, it might be more realistic to adopt the Clouded Leopard as an ambassador species, to give the rest of the conservation effort a focus and to be consistent with reality.

As things stand, the Nam Et–Phou Louey website still leads with an enticing photograph of a tiger, proclaiming the extraordinary density of felids and all other manner of mammals. This image is at variance with what she and her team observed out in the field.

Clouded leopards exist though, and Akchousanh has even seen one in the wild, from afar – itself remarkable because they are so secretive. The photos you find on Google Image are invariably shot inside zoos.

Despite the doom and gloom Akchousanh, who is now looking to pursue a career in conservation in Laos, confirmed the role of the protected areas and the importance of having clear data on which to base policy.

‘My results highlighted the importance of the National Protection Forest Areas for the conservation of carnivores in the country, especially in the northern provinces and along the central Annamite landscape. Overall, my findings contributed to the knowledge of the ecology and interactions of a diverse carnivore community in northern Laos, and results will be used to guide management plans and conservation efforts for carnivores and their prey within NEPL and other landscapes throughout the country.’