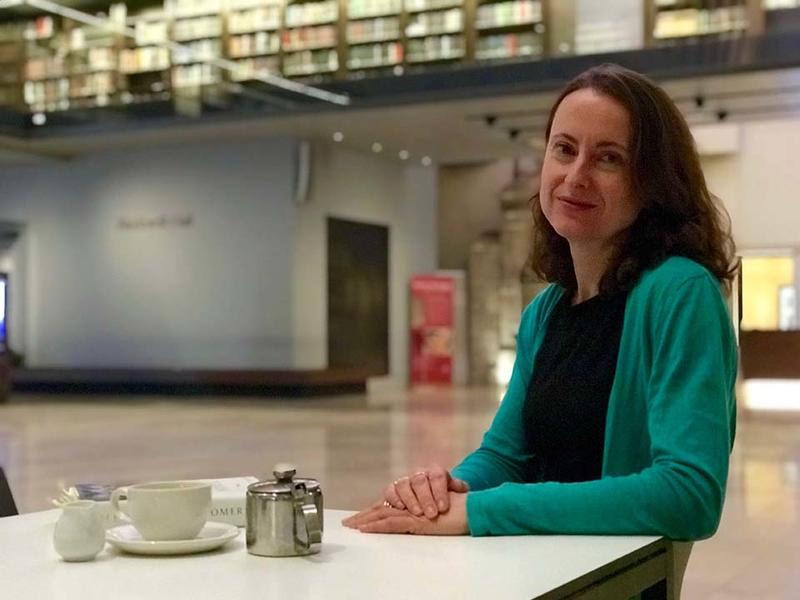 It’s a mixed blessing to be the first female translator into English of an epic poem believed to have been composed around the 8th or 7th century BCE.

When we meet for tea in Blackwell Hall, Emily Wilson has already been asked a great many questions about whether her translation is a feminist landmark — which in some ways, it must be.  It is, Wilson acknowledges, good that it finally happened, and shocking that it took so long.  But Wilson (Balliol, 1990), a Professor of Classical Studies at the University of Pennsylvania, Philadelphia, sees her translation in terms of poetic craft, scholarly responsibility, and literary and ethical complexity – not ideological simplification. ‘My goal here is not to simplify as such, but to open up complexity, to bring out the multi-vocality of the epic,’ she says.  In one popular North American translation of The Odyssey, she says that the text has been jazzed up with exclamation marks and ‘Disneyfied.’ Viewed like this, the requirements of a good translation include thoughtful and clear English, which is not the same as ‘simplification’.

At a lecture in Oxford later that evening, the ten year-old son of a friend (attending his first ever lecture apparently) asked Wilson if her translation was good for kids and students, but maybe too accessible or ‘too much fun’ to appeal to ‘Oxford dons’(!) She responded that clarity of diction and making things interesting on a human level doesn't have to imply conceptual oversimplification — and if Oxford dons really think so, they might want to think again. Noting another translation in which the translator tried to make it all sound a bit archaic and pompous, she writes,

‘My translation is I hope, recognizable as an epic poem, but it is one that avoids trumpeting its own status with bright, noisy linguistic fireworks, in order to invite a more thoughtful consideration of what the narrative means, and the way it matters.’

So is the ‘first female translator’ schtick just a marketing gimmick, I venture nervously?

It turns out, of course, that the answer depends on what is meant by that.

Later on in our tea sipping, Wilson notes that just because it is also a first translation by a woman doesn’t automatically make it more gender-conscious.

The notion of a ‘feminist’ translation can get heckles up, since it can imply that the translator is imposing her own ideology on the original in some illegitimate way.  But Wilson points out that all translations, including the most scholarly and well-informed ones, shape the text according to what the translator thinks matters.  She speaks of to the ‘masculinist’ bias of some prominent earlier translations by men, and describes her own work as less misogynistic, and more attuned to the original text's complexity. ‘I’m resistant to being tagged as this or as that. But yes, I am attentive', she says. The goal of acknowledging the epic's multi-layered literary qualities includes, for Wilson, a thoughtful and precise representation of gender roles, but also a lot else besides. Univocality, Wilson says, begins and ends with ‘Odysseus, hey he’s the good guy!’ Her feminism isn’t a blunderbuss firing back, but a way of respecting different voices and bringing them to life.

Penelope is typically described throughout the narrative poem as being 'cautious' or 'circumspect', whereas her son Telemachus, who in two instances shuts her up, is repeatedly described as ‘thoughtful’ (pepnumenos); a translator has to choose, in each instance, what kind of thought might be going through this moody teenager's mind — and hence, what English word will best convey the quality of thought. Wilson emphasizes that Odysseus is also characterized by cognitive qualities, but they are different from those of either his wife or his son. Penelope is always depicted as risk averse, as cautious, marked by pain and changed irrevocably by time. Odysseus always has a fix, always has solutions, ‘you find the fix and you do it!’ Wilson pays attention not only to the obvious sexual double standards in the poem, but also to the more subtle ways that gender informs each of these character's approach to life, time, and their place in society.

‘Translation’ is something that struggling intermediate classics students do for homework, to prove that they understand at least something about the syntax of the original. But there is a quite different writerly set of skills involved in creating a fluent, readable and poetic translation that allows people who can't read Greek (or Latin, French, Arabic or Mandarin, as the case may be) to get some sense of what it would be like to be immersed in the story-telling and poetic music of the original.  Wilson writes, ‘My Homer does not speak in your grandparents’ English, since that language is no closer to the wine-dark sea than your own.’ She aims to write in clear, unpretentious English, which will please undergraduates and curious non-specialists faced with one of the trickiest texts of them all.

Inevitably, she argues, there is a vast gulf separating a poem based on a centuries-old oral tradition, composed (it is believed) in the 8th or 7th century BCE, from our own culture.

Not least is the slippery transition between figural reality and Greek gods and goddesses, who bestride the scene in fantastic ways that add all sorts of complexities and nuance to an otherwise simple tale about homecoming and the attempt to restore a household to its normal rhythms. The mortal Penelope may be silenced and tearful, but we also meet Calypso, Circe and Athena, all of whom flirt with Odysseus, and all of whose power outstrips his, because they are divine. 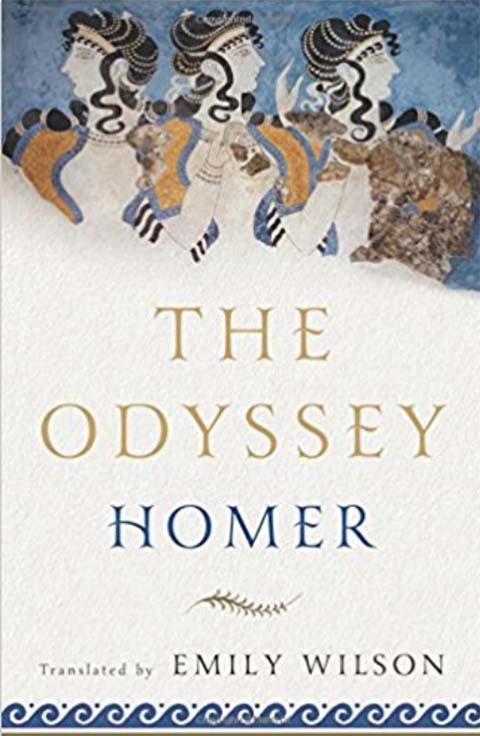 Wilson dismisses the one-time suggestion by nineteenth-century novelist Samuel Butler that The Odyssey was written by a woman, but notes that ‘The Odyssey is a poem in which certain females have far more power than real women ever did in the society of archaic Greece.’ She was careful not to call Calypso 'the nymph', as many translators do, because that 'nymph' in English suggests an absurd figure whose sexuality is inherently comic – whereas 'nymph' in Greek suggests a dignified, perhaps terrifying female nature deity.

More than anything, Wilson's approach to The Odyssey is perhaps most noteworthy for displaying her own background that, unusually for a classicist, lies partly in English literature (she has an MPhil from Corpus Christi College, Oxford).

She loves Milton – her translation of The Odyssey is not ‘influenced by him’ as she is at pains to note; if anything it’s ‘anti-Milton – not grand, not pompous,’ but nonetheless Milton is there, or rather that bits we might not be so familiar with – clarity, whimsicality, humour. Shakespeare is there too: drama. ‘You get so many utterly simple, clear phrases from Shakespeare, yet deep characterization as well. She likes Elizabeth Barratt Browning’s Aurora Lee  - story telling in verse; she likes Byron’s ability to have appeared to have written something in less than five minutes – ‘fluency, light touch.’ Tennyson; Robert Frost and Wallace Stevens’ ‘The Idea of Order at Key West’.

The net sum of this insight led Wilson to a stylistic decision to try and re-capture the highly rhythmic beat of the original, but using iambic pentameter instead of the six-footed dactylic hexameters of the original. As she notes, her approach is that of the conventional meter ‘for regular English narrative verse – the rhythm of Chaucer, Shakespeare, Milton, Byron, Keats, and plenty of more recent Anglophone poets.’

She writes in a translator note, ‘I wanted a narrative pace that could match its stride to Homer’s nimble gallop.’

I mention the equine reference because other commentators have picked up on it too. Wilson laughs, ‘I’m not quite sure where all this is coming from —my daughter rides horses— maybe that’s why!’ Also, as she notes, horses are multi-footed creatures whose movements are described by precise English verbs (trotting, cantering, galloping), which can be controlled, speeded up and slowed down —like the disciplined but varied pacing of her five-footed metrical line.

We talk some more about the slightly stifling effect of The Odyssey, that precisely because it is such a foundational text, it looms too large as an authority, as a ‘classic’. I suggest that part of Emily’s success has lain in her understatement, and her ability to create a translation which lacks the grandiosity that we've assumed, perhaps wrongly, was essential to canonical epic poetry.

Emily Wilson is Professor of Classical Studies and Chair of the Program in Comparative Literature and Literary Theory at the University of Pennsylvania. She began at Balliol in 1990 with a degree in classics; then completed a two-year M.Phil in English literature at Corpus Christi College, before moving to Yale to write her PhD in Classics and Comparative Literature.