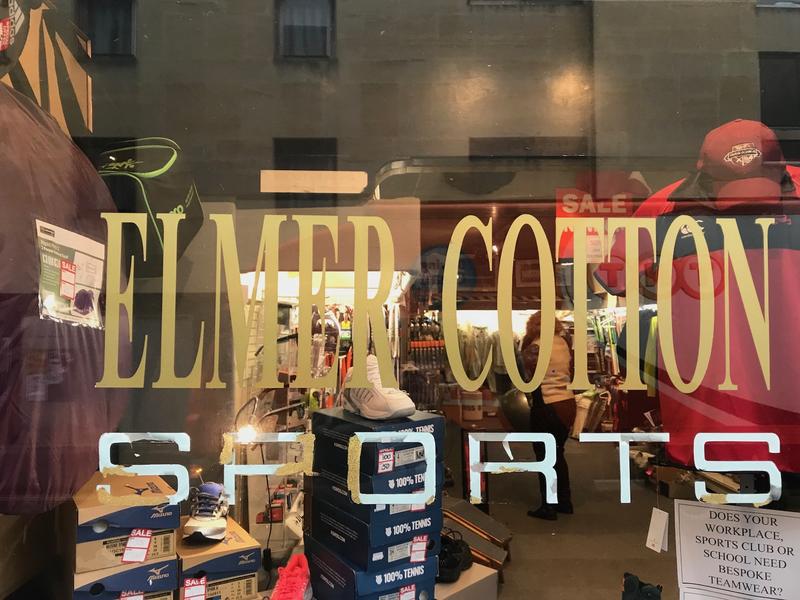 The Turl Street sports shop since 1911, Elmer Cotton Sports, is closing, but some of its employees are to re-open in the Covered Market

When I visited in early December, in the rain, the plate glass windows were stickered with ‘50% Off’ notices. But there is a plan by employees to re-open Elmer Cotton Sports as Blue Blood Sports. 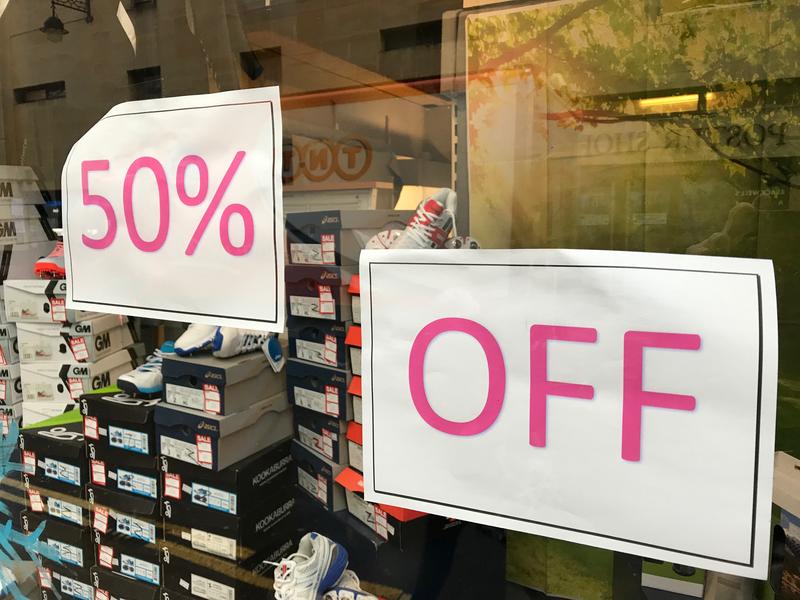 Current owner Judy Barrows (an alumna of the University via the old teacher training college, Westminster, 1995), sprang to my side to help me with my sporting needs, exactly the sort of service that great small independent shops give. She then generously briefed me on what’s happening while politely declining to be photographed for this story.

Widow of the late John Barrows (1948-2015),  Judy was thrust to the centre of the business upon her husband’s death, three years ago. But the mooted 60% rent increase from a lease renewal is why she’s calling time on the store. ‘We didn’t even negotiate because we know we can’t handle cost inflation like that. The City owns the building. I decided to decline a new lease and so we need to be out by Christmas Eve.’ 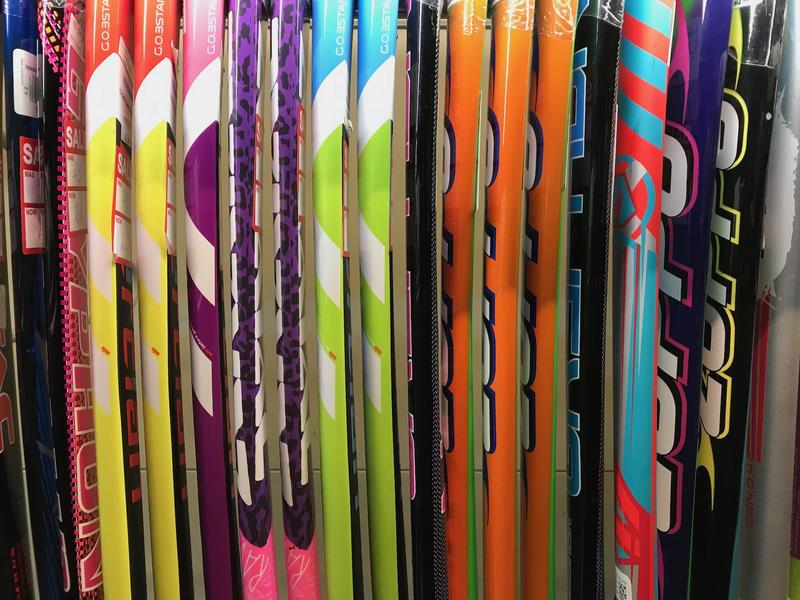 Hockey sticks. When did you last visit a real sports shop as opposed to perm-discounting 'athleisurewear' sellers?

This news has unfurled across the City like a slowly exploding bombshell. Judy says that she has had former customers in the store in tears, reflecting the central role of this sports shop in the University’s last century, and perhaps above all that it is still the only sports shop in the city centre.

Judy laments the tendency of savvy students to go ‘showrooming’, the practice whereby you scope out a product and perhaps even try it on, then promptly leaving and ordering it online to achieve a saving. 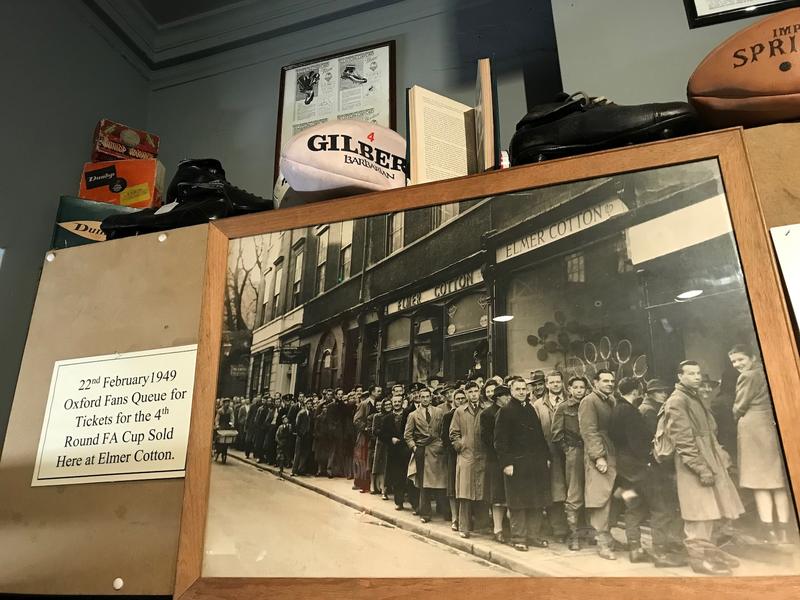 Yet writing for The Oxford Student on Nov 27th, Elmer Cotton Sports Closing its Turl Street store is a Local Tragedy, current student Julian Manieson fully noted the weight of the loss, writing,

'Its haphazard layout and the easy-going nature of the staff might beguile a visitor into thinking Elmer Cotton is a normal sports shop, but its wooden frame and scratchy carpet have hosted Olympians. Here, the late Roger Bannister will have bought his gilded running shoes. Here, the legendary blues rugby sides of yesteryear, in some cases the greatest players of the generation, will have bought their boots, studs and laces.'

Manieson quickly went on to note, under the hashtag #SaveOurSports, that the store’s role remains very important to students,

'Elmer Cotton represents an instance of the upmost significance for our city and University…On Saturday mornings, a queue often forms outside the shop, with people buying mouth guards, shin pads, hockey sticks, footballs, and (when we get to Trinity) the various paraphernalia that cricket necessitates. All of this is in the pursuit of perhaps the last noble enterprise our university offers: college sport.'

Judy says that three big changes to the retail environment have conspired against her business.

‘We’re fed up being a shop window for Amazon,’ she says. Second, she says that the new Westgate Shopping Centre has reduced footfall, a hot topic in the local newspapers because it picks up the wider topic of the ‘dying high street’.

How big has this effect been, I ask? ‘Huge’, she replies.

Third, she says that the move to fast fashion even in ‘proper’ sports kit renders stock out of date much more quickly than it used to. ‘Blue football boots one season, pink the next. You have to heavily discount the old stock and once you become a constant discounter you can’t get out of it.’

The business is a good business, she says, but now is the time to call time on it. The silver-lining is that a good proportion of turnover is team wear and other workwear for both colleges and local companies. This custom business is not so readily replicated by Amazon. 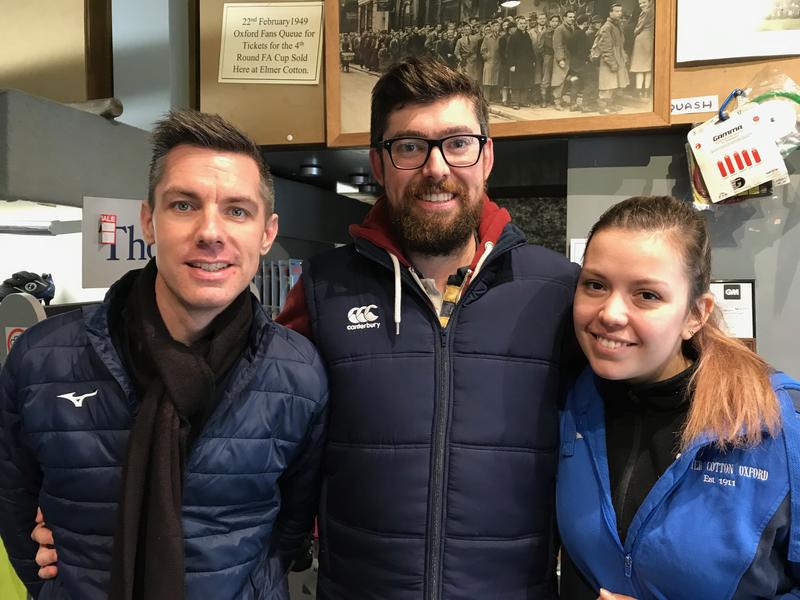 To what extent Judy will remain actively in business is unclear, but three of her employees, Dale Harris, Ben Cook and Steliana Stefanova, are planning to re-open a similar store in the Covered Market early in 2019, under the name Blue Blood Sports.

With over three decades of experience in the business between them, Dale’s team intimately understanding local needs and the complex borders of Town and Gown, terms and vacations. Dale has come to an agreement with Judy which he says is amicable. While the Turl Street store will close, a new business will occupy the former Macsamillion shoe shop in the Covered Market, just as soon as the current pop-up store has gone.

Ben says, ‘We know this business inside and out. While it will be the end of an era in one sense, we are confident of our new project and will remain within very easy walking distance of all the city centre colleges. When someone needs a mouthguard on a Saturday morning, we’ll have it for them. That’s quicker than Amazon Prime, incidentally. You stroll in and you buy it. We know what students want and we keep the right stock levels at the right times of the year.’

For now, whether you want a cricket bat or a snooker cue, it’s a case of rush to the bargains. Everything is half price.