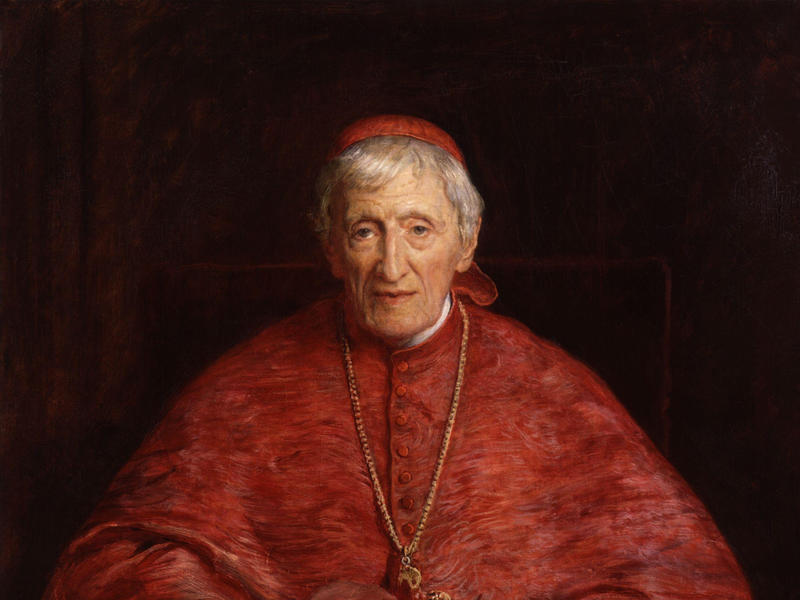 John Henry Newman (1801-1890), since October 13, 2019 considered a Saint by the Roman Catholic Church, was deeply entwined in the life of the University of Oxford even when he moved himself away amidst religious and intellectual controversy – first in 1842 to the nearby village of Littlemore and later to Birmingham.

He matriculated as an undergraduate at Trinity College but is associated much more with Oriel College, which elected him a fellow in 1822; and with the University Church St Mary the Virgin, where he was later Vicar. He was also ordained in Christ Church Cathedral by the Bishop of Oxford, Edward Legge, in 1825 and became briefly a curate of St Clement's Church, Oxford.

A Victorian colossus in the world of theology and letters, he was also one of the most controversial and divisive figures of the era, leading what became known as the Oxford Movement and arguing that the English Reformation had set wrongly like a crooked bone, an arm that might be re-broken and re-set anew.

Newman’s influence in Oxford peaked in the late 1830s until controversy engulfed him and uproar ensured that various public authorities agitated for his departure.

A case-study in unintended consequence, Newman’s subsequent departure from Oxford, resignation as Vicar of the University Church and conversion to Catholicism split the Anglican church into factions in ways that reverberate to this day.

Upon his death, the Anglican Church Times wrote,

‘THE death of Cardinal Newman, at the age of ninety, removes from us the last survivor of the great Tractarians, one of the few remaining links with a former generation, one of the most striking personalities of this great century. Although of late years he has spoken but seldom to the public ear, yet about his life of retirement and devotion at Edgbaston there gathered a unique interest and an almost affectionate regard. Catholics and Protestants, Christians and Agnostics, alike looked with genuine reverence upon the venerable age of the great spiritual guide and teacher.’

The forgiving tone didn’t prevent the Church Times from going on to describe in the language of conspicuous failure, the way in which by ‘going over’ to Rome on October 9th, 1845, Newman had stepped out of the boiling tea cup of English theological controversy into the distinctly cool ocean of Roman Catholicism.

Having arrived at Rome, the writer suggested, Newman found a strange welcome despite much later being made a Cardinal by Pope Leo XIII in 1879, a year after being offered an honorary fellowship in Oxford, and revisiting the University for the first time in over three decades.

However that was not the end of the matter and the narrative has changed with the passing of 129 years.

Now the Vatican has stepped in and claimed Newman through canonisation, in effect removing him forever from the Anglican communion.

In order to make him a saint, the Vatican claimed that Newman performed two posthumous miracles, in 2001 and 2018, curing an American deacon of a spinal disorder and a pregnant woman of an illness, respectively.

His canonisation at a ceremony conducted by Pope Francis held on October 13th in Rome was attended by Prince Charles and a delegation from the University.

All of these different elements would have been unthinkable, if not riot-worthy, a hundred years ago in England, and might today be taken as evidence of the general recession in British public life of enthusiasm for specifically Christian controversies as opposed to the broader political ones.

But there is another dimension to Newman’s legacy. He was an educationalist who authored The Idea of a University, one of the most influential texts of the past century for attempting to put the case for a broad, liberal education as the justification for any young adult attending university and working towards a degree. Newman put forward the case in The Idea of a University that universities should be free of religious interference, putting forward a secular, pluralist and inclusive ideal.