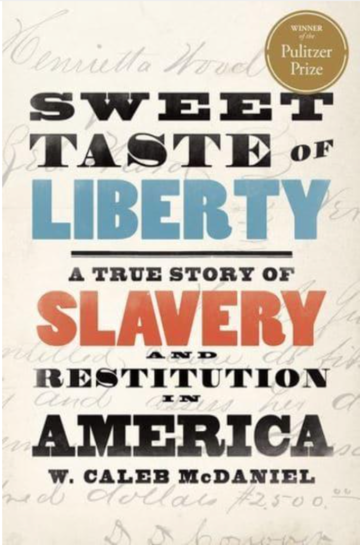 QUAD swapped notes with the author of Sweet Taste of Liberty: A True Story of Slavery and Restitution in America, Professor Caleb McDaniel.

The backstory is that Caleb painstakingly researched the book following a seemingly innocuous tip, Oxford University Press then published the book late in 2019, and it duly won the Pulitzer Prize for History in 2020, just as COVID convulsed the world and amid ongoing protest focused partly around the Black Lives Matter Movement in the US.

The book reads unlike most scholarship, offering an extraordinary bringing to life of one of history’s most obviously voiceless individuals: a black woman called Henrietta Wood, twice a slave.

As the blurb puts it, the book is ‘an epic tale of a black woman who survived slavery twice and who achieved more than merely a moral victory over one of her oppressors. Above all, Sweet Taste of Liberty is a portrait of an extraordinary individual as well as a searing reminder of the lessons of her story, which establish beyond question the connections between slavery and the prison system that rose in its place.’

The epic tale is also a work of legal detective sleuthing, with an extraordinary amount of painstaking work carried out to ensure that every detail and claim is rooted in evidence.

This is the incredible thing about the book. Not only is it a page turner, but you can almost breathe the air and imagine yourself in a (more often than not) locked room alongside Henrietta; or in a busy, harsh environment in which there was an endless list of domestic chores or viciously hard cotton planting in unforgiving temperatures. It is a life brought to life.

Anticipating the suspicion that somehow the available, presumably meagre sources would have to be coloured to impart plot momentum, Caleb notes that the sources were more extensive than at first anticipated, not least because Henrietta chose to share her story with a journalist and because her accused oppressor was a prominent figure. There was an element of sensation around the final legal case, that ensured that it was widely reported in the US media, often with errors. Caleb says he went the extra mile to share his sources both in the book and on a dedicated website.

Writing to QUAD, he says:

As a historian I'm trained to stick to the sources, and the book is fully footnoted so that readers can see the evidence for even the most seemingly minor claims, like the state of the weather on a given day. At the same time, some of the historians and scholars I most respect, such as Saidiya Hartman and Jessica Marie Johnson, have pointed out that the archives of slavery were not built to tell the stories of enslaved women, and if we refuse to imagine their lives beyond what can be verified absolutely in the sources that remain, that is deeply unsatisfactory. There is no simple way to overcome this fact, but I talk about some of these issues in an essay at the end of the book. I also made my research notes and many sources available on an open-access website throughout the writing of the book so that readers could see the materials I worked with and reflect on different ways the story could be told. It's at http://wiki.wcaleb.rice.edu.

We also asked him about winning the Pulitzer Prize for History in 2020:

The news of the prize came as a total surprise to me. I learned of it from a text message from a friend, that simply said ‘Congratulations.’ I had to ask for more information! It was an incredibly humbling experience. What excited me most was the knowledge that more people would now learn of Henrietta Wood's story.

Can you comment on the present moment in light of the past, when following the Trump years so many advances in Civil Rights appear to have been thrown into doubt again?

Among the many lessons one might glean from the stories in Sweet Taste of Liberty, one is that history doesn't move in a single direction. The arc of Black history is not one of simple progression or declension but of ongoingand changing struggle. As a twice-enslaved, twice-emancipated woman who won a significant legal victory (though not as substantial as the one she was seeking) Wood herself experienced how easily a taste of freedom could be taken away or turn bitter. Yet, as she put it, that taste was still ‘sweet.’

There was a significant reckoning over racial injustice and the legac of slavery in the United States during Reconstruction that was nonetheless woefully incomplete and resisted at every step of the way by opposing forces. Historians may look back on the moment we are in as a similarly staggered shift.

Perhaps the very heart of the story recounted is the re-enslavement of Henrietta Wood, itself an unfamiliar narrative.

She had been issued freedom papers and lived in Cincinnati in the state of Ohio. In one of numerous such misfortunes, her papers were lost in a fire.

Just below Cincinnati lies Kentucky, which still recognised slavery in the mid-19th century. A notorious slaver Zebulon Ward, connived with Wood’s then employer, who one day took her across the Ohio River in a horse-drawn trap, the windows obscured. Then she was re-sold into slavery that persisted for years, with innumerable twists and turns, only finally receiving her freedom after the conclusion of the Civil War.

Subjectively, the book offers a riveting legal drama rooted in a one life, while still allowing those individual moments to illuminate massive structural issues such as the fact that contemporary prisons were originally managed privately and played a structural role in criminalising recently freed slaves, permitting them to continue to be exploited by former slavers.

Prisons in effect became substitutes for slavery when slavery ended – at enormous profit to the men who ran them, one of them the same individual who abducted Henrietta from her original freedom in Cincinnati and threw her back into slavery, Zebulon Ward.

That was a big challenge for me in writing this book: how to write the narrative in such a way that readers would keep turning pages to the end, while giving them the context they needed to understand why what happens at the end matters so much, and how difficult it was for Wood to arrive there. The story itself ended up having more—and more dramatic—twists and turns than I suspected when I began my research, which hopefully keeps readers engaged all along the way.

Academic writers are trained primarily to make arguments, but storytelling is itself a kind of argument. After all, Wood's enslaver Zebulon Ward told his own inaccurate version of the story to make a certain kind of argument. My goal was to tell the story in a way that was accountable to Wood and the claims she made, and in a way, that also advances an argument.

Without ruining the plot, Henrietta Wood pursues Zebulon Ward in the law courts and eventually —after many setbacks that turn the final chapters into a supercharged cliffhanger—wins her case and is given material compensation, albeit much less than she deserved and was deemed to be owed at the time.

This points to the present again and to other forms of oppression including colonialism and indentured labour.

The demand for reparations for historical injustices was made not only by Henrietta Wood, but also by countless other survivors of slavery and their descendants. The demand persists, for reasons that I hope the book helps readers understand. In that sense, the story of Sweet Taste of Liberty is both a true story of restitution and a question that yet remains unanswered.

W. Caleb McDaniel is Mary Gibbs Jones Professor of Humanities and current Chair of the History Department at Rice University. He also serves as the Co-Chair for Rice’s Task Force on Slavery, Segregation, and Racial Injustice.

Sweet Taste of Liberty: A True Story of Slavery and Restitution in America, was published in 2019 by Oxford University Press. It was supported by a Public Scholar grant from the National Endowment for the Humanities and received the 2020 Pulitzer Prize in History and the Avery O. Craven Award from the Organization of American Historians.

This feature forms the first of a QUAD-specific, three-part series of author profiles to mark Black History Month.