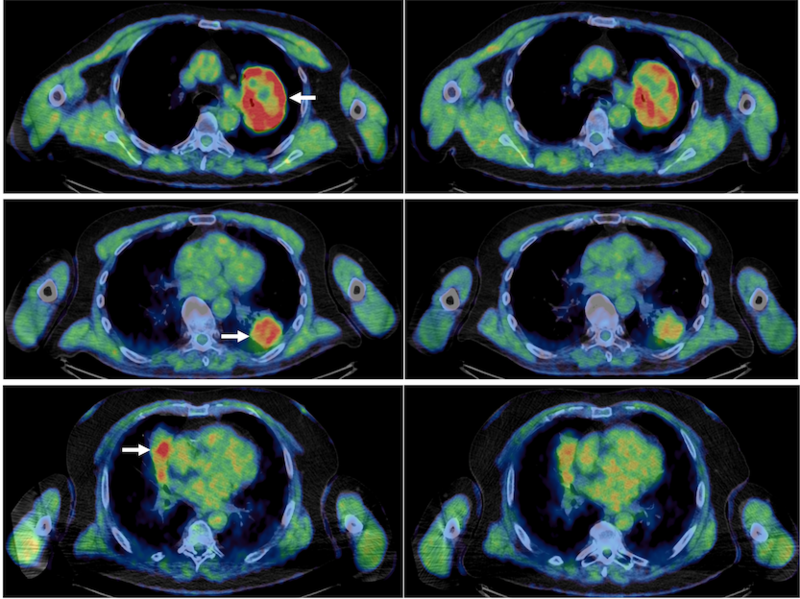 Application of a well-known drug to normal cancer therapies could have a major global impact but without the usual financial cost.

Professor Geoff Higgins (pictured, left), Consultant Oncologist at the Oxford University Hospitals Trust and a rising star in global oncology, speaks glowingly of a well-known, decades-old, inexpensive drug that might be heading for a make-over as a cancer treatment.

‘It’s called atovoquone and many people will already have had it, for the purpose of preventing malaria and certain types of pneumonia.’

Atovoquone was the ‘winner’ out of approximately 1,600 other drugs tested in an exhaustive process of elimination resulting in an academic paper published in 2016.

What Higgins and his team sought in the drugs was an ability to reduce hypoxic (low oxygen) environments that favour cancerous tumours and frustrate common therapies.

‘Atovoquone was not in fact technically the outright winner,’ he explains. ‘It came 7th. But numbers 1 to 6 were disadvantaged by other factors such as patient side effects.’

While a new trial combining atovaquone with chemoradiotherapy has just commenced in February 2021, and would be followed by an even larger efficacy trials utilizing hundreds of patients, the implications of the initial finding are already very wide.

This is because of the absence of any commercially valuable intellectual property (IP) and the very low cost of the actual drug. Not only would the UK’s NHS be able to pick up the treatment immediately, but also any healthcare authority anywhere in the world, including low and middle-income countries.

‘We don’t yet know what level of efficacy we can achieve,’ warns Higgins. ‘We did commission some mathematical modelling. A very high success here would be improving the efficacy of radiotherapy by 30-35%, but at the lower end anything around the 3-5% and above would still register as a success.’

‘We did study the IP angle. If you can register or patent novel IP it can help in acquiring funding from a commercially motivated pharmaceutical company, speeding up the clinical trial process. We will need to fund the remaining clinical trials. But beyond the trials, the actual healthcare benefit is of far greater consequence if there is no IP.’

The first trial was supported by the Howat Foundation, while the second one just begun, called ARCADIAN, is funded by Cancer Research UK.

‘The flexible funding we have received has been immensely helpful in getting the trials done so quickly. To achieve what we have in just three years is considered very fast.’

Professor Higgins says that he is also working with Professor Chris Schofield FRS, a well-known Oxford chemist, to identify other treatments that utilize and understand the mechanisms behind how tumours respond to changes in oxygen levels.

How the body uses oxygen has long been an Oxford special competence, and led to the Nobel Prize being awarded to Oxford professor Sir Peter Ratcliffe in 2019.

Sir Peter was announced as a winner of the Prize alongside William G Kaelin, Jr of Harvard University and Gregg L Semenza of Johns Hopkins University. Together they discovered the key mechanisms that our cells use to detect and respond to low oxygen levels, known as 'hypoxia' – exactly the area now bearing fruit in Professor Higgins’ oncology research.

It has for a while been known that cancers metabolise a large amount of oxygen in order to create the energy needed to divide, grow and spread rapidly. This results in oxygen-starved, or ‘hypoxic’, environments around tumour cells.

Radiotherapy relies on oxygen to attack cancer cells, and previous studies have shown that three-times higher doses of radiation are needed to destroy tumours in hypoxic environments, compared to those in oxygen rich environments.

If atovoquone can be shown to safely address this problem, as Professor Higgins hopes, it could reduce the amount of radiotherapy needed, greatly to the benefit of the patient.

Whereas the trial has so far focused on lung cancer (‘a particularly aggressive cancer that I was already focused on in previous research’), the other significance of the potential breakthrough is that it has application to ‘all solid cancers’ (meaning cancers that produce tumours).

The ATOM study, published today in Clinical Cancer Research, administered Atovaquone to patients with non-small cell lung cancer before the surgical removal of their tumours. Using state-of-the-art scans to measure tumour hypoxia, this study found that tumours had 55% less hypoxic volumes than those who didn’t receive the drug.

Following genetic analysis, it was shown that Atovaquone successfully disrupted the metabolic pathways of the tumour that are involved in the consumption of oxygen to create energy for tumour cells. The drug successfully reprogrammed the tumour cell metabolism so that more oxygen was present around the tumour, making it more susceptible to treatments.

‘I’m delighted that the results from the study are so positive so that we can take the next step towards repurposing a well-established drug as a new, effective anti-cancer treatment.’

Dr Malcolm Howat of the Howat Foundation said, ‘Despite being the biggest cause of death in the UK, there is still much to be learnt about cancer and how we can optimise treatment. Atovaquone’s anti-hypoxic qualities, as discovered in this study, is one part of this puzzle.’

This study was led by Geoff Higgins, Professor at the Department of Oncology, University of Oxford, and Consultant Clinical Oncologist at the Oxford University Hospitals Trust. It was funded by the Howat Foundation, who support translational research for the benefit of cancer patients.