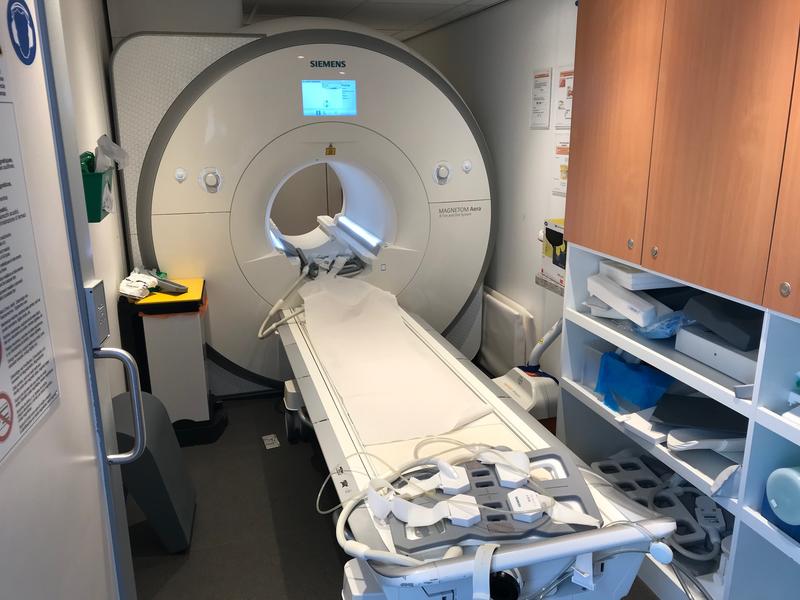 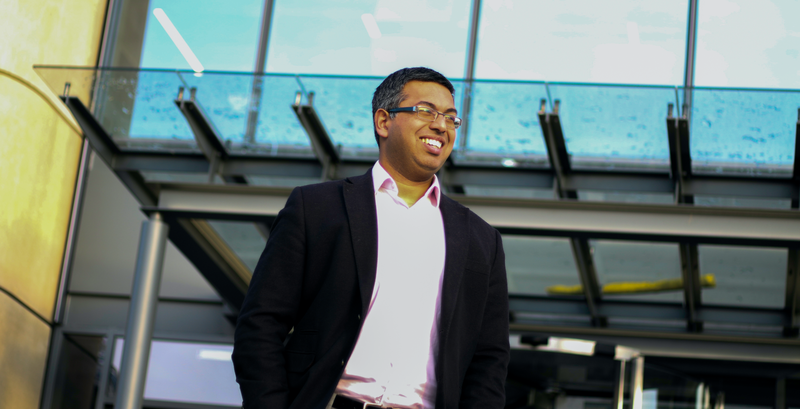 Oxford company Perspectum Diagnostics has become a world authority on the potential of COVID-19 to injure fundamental organs in the bodies of former sufferers who did not necessarily even get admitted to hospital, or whose symptoms were mild but then developed ‘long COVID’ or ‘post-COVID syndrome’.

Company founder and former Oxford student Dr Rajarshi Banerjee (Trinity, 1996 - pictured above) is a world renowned expert at MRI scanning, originally focusing on fatty liver disease. Before COVID-19 struck, he had widened the company’s focus to multi-organ scanning in relation to diabetes.

He correctly predicted last March that COVID-19 would cause an inflammatory response as the body’s immune system went into overdrive to combat the virus.

But what neither he nor anyone else could have predicted was just complex that process would be, or how serious.

To have evidence meant recruiting volunteers to a scanning programme, which took place in 201 volunteers between May and June 2020. Banerjee’s committee then sat down to analyse the first batch of scans on August 5 at 9am.

‘I remember this day very clearly. We sat down to look at the first dozen full body scans of former COVID sufferers who had been complaining of prolonged symptoms such as breathlessness and fatigue. We wanted to be the bearer of good news, because many of our volunteers were younger in age with no co-morbidities. An hour later we had three or four out of 12 showing an inflamed heart – basically a quarter of the sample which was much, much higher than we had expected. Worse still, some patients were showing damage across several organs not one.’

He notes that the term ‘Long-COVID’ was first aired in a Tweet last May, but quickly became an established concept around the time that Perspectum started to share these results.

Roll forwards a year and the full detail of that first programme of scans has been published in the peer-reviewed journal BMJ Open article. The numbers stack up as follows:

Impairment was present in the heart in 26% (myocarditis 19%; systolic dysfunction 9%), lung in 11% (reduced vital capacity), kidney in 4% (inflammation), liver in 28% (12% inflammation; 21% ectopic fat, 10% hepatomegaly) and pancreas in 40% (15% inflammation, 38% ectopic fat); and spleen in 4% (splenomegaly). 70% of individuals had impairment in at least one organ. 29% of individuals had multi-organ impairment, with overlap across multiple organs.

The individuals behind these numbers were predominantly healthy, not hospitalised by COVID and not with any underlying co-morbidities – in short not the population groups typically behind the daily death counts that became the grim headlines of the first wave last April. Their mean age was just 45.

Knowing that the world was trying to put out a fire while he was preoccupied with the glowing embers, Banerjee didn’t expect a massive response, but what he also didn’t predict was political opposition. He says that there was a definite reluctance by authorities to entertain any narrative around long-COVID.

Balancing that, the company was inundated with volunteers desperate for their long COVID symptoms to be taken seriously. By late 2020 the company was bringing in a complete MRI Scanning truck daily to two sites, Oxford and London, and conducting as many full body, multi-organ body scans as they could (over 500 to date). The one shown below is pictured outside the Perspectum office in Oxford, November 2020. 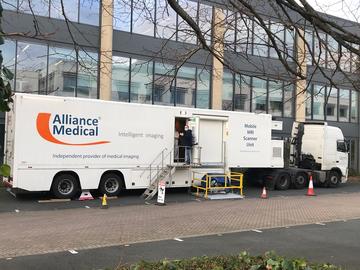 Regular webinars throughout the past year have allowed participants to ask any questions they wish, effectively amounting to a giant communal research programme rolling along while Perspectum raced to develop the full diagnostic service in the background.

Banerjee’s background is as a quantitative scanning expert focused on the liver. His original insight, the basis of his Oxford doctoral thesis, was that it was possible to eliminate uncertainty interpreting MRI scans of the liver by placing numbers against all the different elements of the scan result.

His dream was to democratise an otherwise prohibitively expensive service. ‘I wanted Tooley Street rather than Harley Street,’ he says, contrasting a down at heel road he knew well near London hospital St Thomas’ Waterloo, with the swanky street associated in the UK with the pinnacle of private medicine.

He wanted to provide a fast and reliable service to clinicians all over the world, to help the many millions of individuals suffering from some version of fatty liver disease – 100 million in the US alone.

He explains that the company was founded in 2013 expressly to address this huge, unmet need. By late 2019 he had a workforce of 150, significant revenues from the US and a fabulous new office to move into on Oxford Business Park, situated in the Cowley district of the city.

When COVID-19 struck the company was apparently imperilled. Well before the first UK lock-down, Banerjee saw the wisdom of sending his workforce home to protect them from the mysterious virus, even though it meant forestalling the move to the offices, which remain largely empty a year later.

Kelly says that what happened across 2020 was nothing short of amazing and galvanized the whole company:

We had ethics approval within a week, defined and launched the Coverscan trial, developed an imaging protocol, got Board approval to bring a mobile MRI scanner to Perspectum’s office 2 days per week (now 5), started recruiting volunteers and scanning them, and developed software from concept to preliminary version to a formally specified version to a quality software product that could be tested rigorously for robustness and repeatability, and submitted for MHRA approval – all within 9 months.

She says that this sequence of developments would normally have taken as much as ten times longer.

Sir Michael Brady (pictured below with Dr Cat Kelly), who is Emeritus Professor of Oncology at Oxford, a globally renowned expert in medical imaging and a founder and current chairman of Perspectum, recalls the most incredible atmosphere of esprit de corps he has ever seen.

‘Everyone pulled together irrespective of what part of the company they were working in, or their particular specialist area of knowledge’, he says. 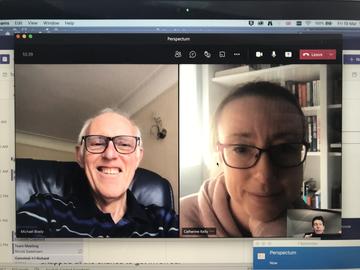 The remarkable end-point of this particular sequence was emergency-use approval on January 13, 2021, for Coverscan as a diagnostic service, granted by the UK’s medicine and healthcare product agency the MHRA.

But as Banerjee sees it - he is affectionately known among colleagues only as Banjo – this is the start not the end, for the terrible reason that long-COVID is real and in some cases very serious.

‘We are now looking at 3-600,000 long-COVID sufferers in the UK alone. Globally, we’re talking about a large population whose long-term health prospects have been blighted. That is a major healthcare and policy challenge, whichever way you look at it.’

His greatest worry is not just that exhausted health services fail to take the matter seriously, but that they fail to appreciate the ‘multi-organ’, ‘whole body’ aspect of the problem.

‘Multi-organ goes against the whole profession. You’re expected to be a specialist in the heart, the liver, the pancreas, the aorta, or the spleen – yet some of our patients have shown damage to several of those organs at once, sometimes all of them.’

‘That’s the fundamental challenge of COVID that we have to grapple with. It’s a devious virus that seems to create long-term auto-immune problems in otherwise young and fit adults, and we’ve barely scratched the surface of dealing with it.’

Link to the main journal paper cited in the article is here: https://bmjopen.bmj.com/content/11/3/e048391 - Coverscan trial - community-based diagnosis of long Covid, and the prevalence of organ damage 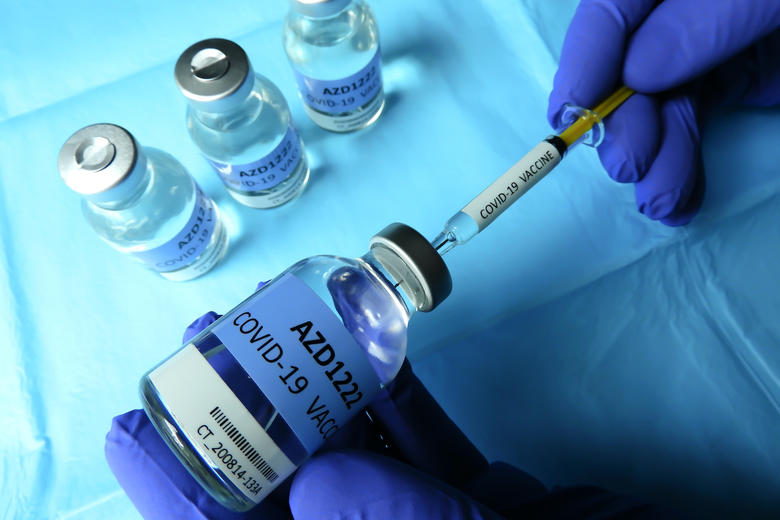