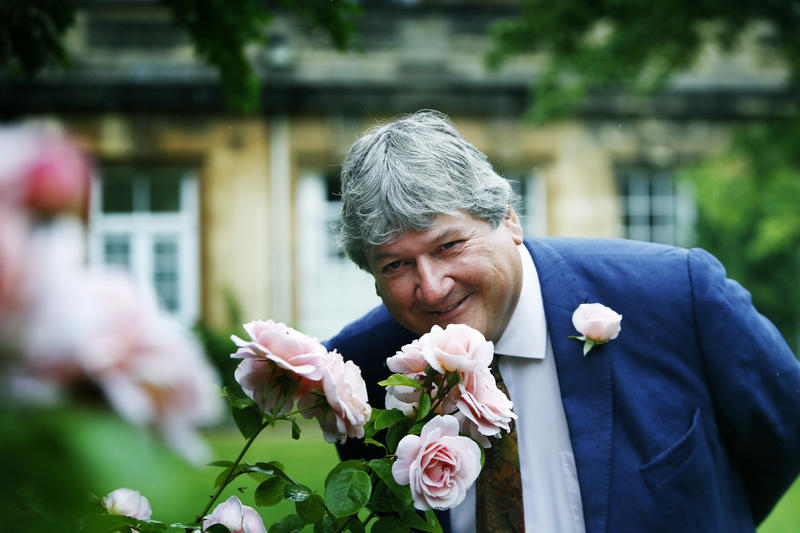 A shell pink shrub rose to celebrate their 400th anniversary

What else could the country’s oldest botanic garden, located on Rose Lane in Oxford, do to mark its 400th anniversary, other than create a delightful new rose for the world to enjoy?

Oxford Botanic Garden Director Professor Simon Hiscock (pictured) revealed the new rose on July 25, the exact date marking the 400th anniversary of the founding of the Garden, accompanied by rose breeder Ian Limmer of Peter Beales Roses Ltd, who rose to the challenge of creating a new hybrid which speaks of Oxford’s historical importance in botany, while being destined for gardens of the future. They announced the long-awaited name of the rose, The Oxford Physic Rose, in honour of the Botanic Garden’s inception four centuries ago as a medicinal (Physicke) garden, growing plants for the medical students at Oxford.

The Oxford Physic Rose will be launched at the Chelsea Flower Show 2022 but visitors were allowed to view the early samples in Oxford today. Mr Limmer described it as 'a shell pink shrub rose which has all the characteristics of a classic old-fashioned rose, yet with the qualities gardeners have come to expect from a contemporary rose, such as robust health and vigour.'

He explained that the bloom shape is open cupped, with the semi-double flowers lending themselves perfectly for pollinating insects drawn to the rich golden coronet in the centre of the blooms. Its scent is described as reminiscent of a classic rose, very sweet and strong.

Gardeners can look forward to a rose which will be perfect for specimen planting in the middle of a border or trained as a small climber next to a fence or wall. It is tolerant of shade and suitable for growing in a pot.

Commenting on the idea behind this birthday rose, Professor Hiscock said:

'Roses have always been a part of the Botanic Garden and the reason Rose Lane is so named. They are the national flower of England, a symbol of peace and the inspiration behind a multitude of artistic, poetic and literary endeavours. Their natural oils and perfumes benefit our well-being in so many ways. So, when my partner Suzanne, who has a particular love of roses, suggested this, I knew it was a brilliant idea.'

The brief to Peter Beales, a breeder with one of the finest collections of old and species roses to work with, was simple. The new rose must be pale pink, with a beautiful scent, open flower for pollinators and repeat flowering (an unusual trait in old roses).

Professor Hiscock concluded 'Being the best rose breeder around, Peter Beales delivered. It was fitting to give one of the first Oxford Physic Roses to our patron HRH Prince of Wales when he visited the Garden on June 8th. He loved it, as many more will doubtless do.'

Any keen gardeners wishing to register their interest in purchasing The Oxford Physic Rose when it becomes available next year should subscribe to the Oxford Botanic Garden mailing list here: https://obga.web.ox.ac.uk/rose