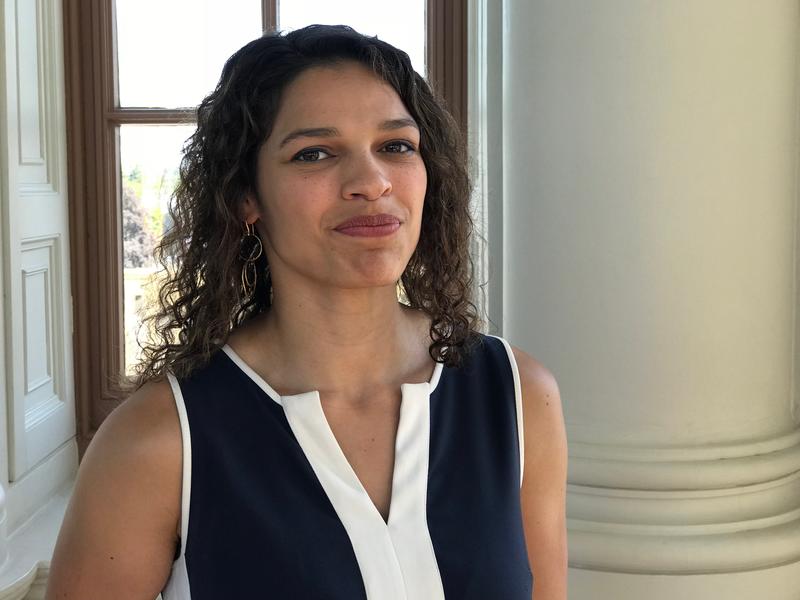 Recent Oxford alumna Beverly Leon on being a pro-footballer

‘How do I extreme-problem-solve the crisis of our democracy?’ asks Beverly Leon (Green Templeton College, 2017) at the end of our coffee.

The former professional footballer from Boston, Massachusetts credits her just-concluded Oxford degree in comparative social policy with giving her the conceptual framework and thinking space to state the question.

Her answer to the question is already taking shape. With the help of an evidently brilliant undergraduate app designer (her fiancée’s cousin, an undergraduate at Pratt) she’s building a digital platform ‘to reduce barriers to participating in our communities.’ 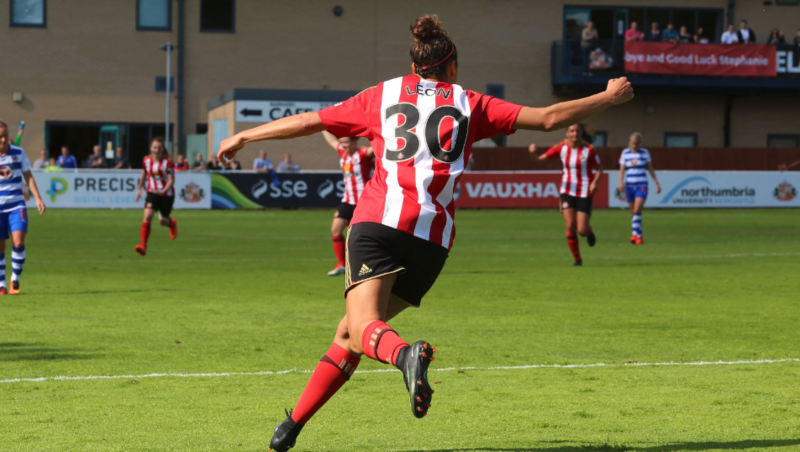 Beverly Leon having scored against Reading at a crucial moment, for Sunderland

She scrolls through its beautifully minimalist design features on a laptop, and explains how the technology is actually designed to get people away from social media and screens and out into their local communities. The name of the app is Local (this is provisional!).

‘It’s hyper-local. It will use a powerful piece of software to source events from the web, all over the country [the US], and it’s aimed at young adults especially in the 16-20 year old group and helps them discover ways to become more civically engaged citizens.’

What’s the football connection, I ask?

It turns out that Leon’s CV is one of those completely topsy-turvy delights that Oxonians seem to specialise in.

Her first degree in history, with a business management component, was from Columbia University, New York City. Despite a year of working flat-out as a banking analyst for Morgan Stanley she was able to maintain her fitness towards her real goal, to play professional soccer, leading to a professional contract in Iceland’s Champion’s League in June 2015.

From there her dream led to a pro-contract with the women’s team for A.C. ChievoVerona, in Verona, Italy, and thence to a third berth with Sunderland AFC Ladies, in the UK. While in Italy her training regime left spare time and she helped a Deliveroo-style start-up called Supermercato24 by pitching venture capitalists for funding.

‘We had a lot of downtime as we trained in the evenings, so I’d spend most of my days exploring the city and I am always looking around me,’ she says. Literally so with the Supermercato24 side-venture – she was looking for another address and wandered into a warehouse, slap-bang into her next employer, entailing not a single CV and rejection email and a reminder that life is ultimately a face-to-face activity too.

While at Sunderland she reconnected with a friend then pursuing an MPhil at Oxford, realising then and there that her other dream had always had to do with social policy, young adults and citizenship, themes reflected in extra-curricular activities she had pursued while an undergraduate.

Our coffee today at BREW, North Parade, is a chance to reflect. She reports that with ageing western societies and our uneven pursuit of gender equality in matters ranging from parenting to care of the elderly, family policy is the fastest growing space in social policy.

One Oxford professor who left a big impression (‘she’s incredible’) is Mary Daly, a fellow of Green Templeton and Professor of Sociology and Social Policy in the Department of Social Policy and Intervention. Among many other areas of expertise, Daly is a world leader in the comparative study of gender inequality and its persistence (alongside family and care policy)

For Leon, ask no further than soccer for the evidence. Had she been born a man, as a friend noted, her career as a footballer would have made her wealthy. Leon estimates that less than 1% of the entire global football pay packet goes to the womens’ teams, most of them run on a shoe string and never with the sort of big-ticket sponsorship routinely awarded to the men’s sport.

‘If you’re a female player at Chelsea, right now, you can probably make a decent wage for a women’s footballer”

At Sunderland Leon received a small salary (with some appearance and performance bonuses), simple accommodation but no bus ticket.

‘I was only able to do it because I saved every cent from the year I worked in banking,’ she says.

As for racism in football, well that’s a whole other (troubling) conversation that runs right across the gender one. She is an avid ambassador for Show Racism the Red Card, the UK’s leading anti-racism educational charity.

Poised to return to New York City and an MBA programme at Columbia, she is already planning a pilot of LOCAL in a Harlem high school.

‘We underestimate young people, but they just need the (right) tools. The particular strength of LOCAL is that it brings in a game element, a bit like Strava does for athletes, keeping count and sharing results among peers. So if you attend a town meeting or a charity run or an arts festival, you get points. Ultimately, I believe participating in our communities should be easy and accessible, at times it can feel like the very place we live is a world away, Local aims to change that.

Beverly is co-founder of an innovative career development program to help women leaving full-time soccer playing. It's called England Football WSL1 Career Development Program. She is also an ambassador for UK educational charity Show Racism the Red Card. She returned to New York  in August 2018, to pursue an MBA and her hyper-local app Local.